Digital comics website, Arktoons, has added a classic Chuck Dixon story to its library as the site celebrates 4 million page views since its launch in April.

The classic Chuck Dixon story added to the platform is The stranded which features works by Argentinian artist Enrique Villagran.

Not only has the title returned to its original, but Arktoons has also remastered the series. It was originally released in black and white and is now fully in color. 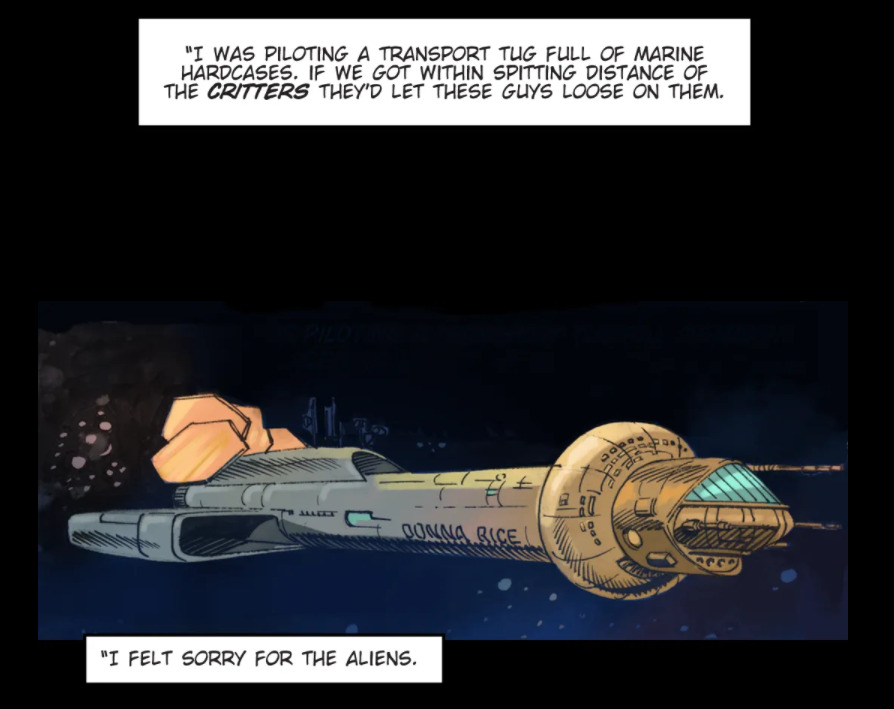 As for the story, it follows US Space Cavalry Captain Doyle Macklinton as he pilots a personnel carrier full of Marines with his co-pilot Lt. Veronic ‘Ronnie’ Killy as they do battle against an invading alien force.

However, once they engage the alien forces on Europa, they go through a time warp and find themselves stranded on prehistoric Earth. Not only are they stuck, but a number of alien forces have also crossed the Warp and still have their plans to take over Earth. 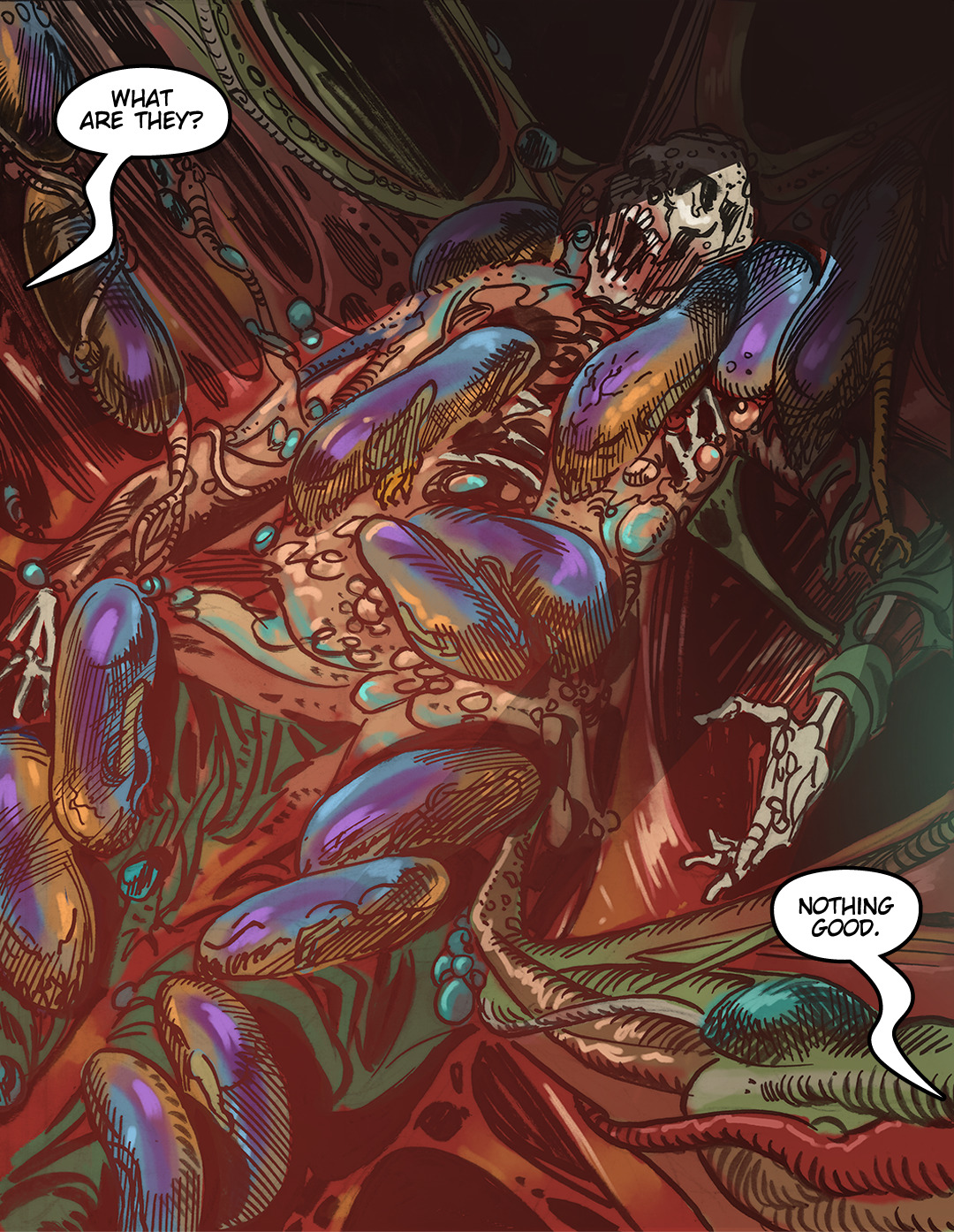 The original official Apple Comics description read, “When rocket captain ‘Doy’ MacKlinton and his beautiful co-pilot ‘Ronnie’ Killy blew up the stargate of the alien invaders, they thought they had stopped the rocket. invasion – instead, they discovered they had trapped themselves in the prehistoric past!

“Now, even if Doy and Ronnie don’t understand the language of their own ancestors, they must lead them – with only rocks and spears – against the deadly high-tech alien threat!” 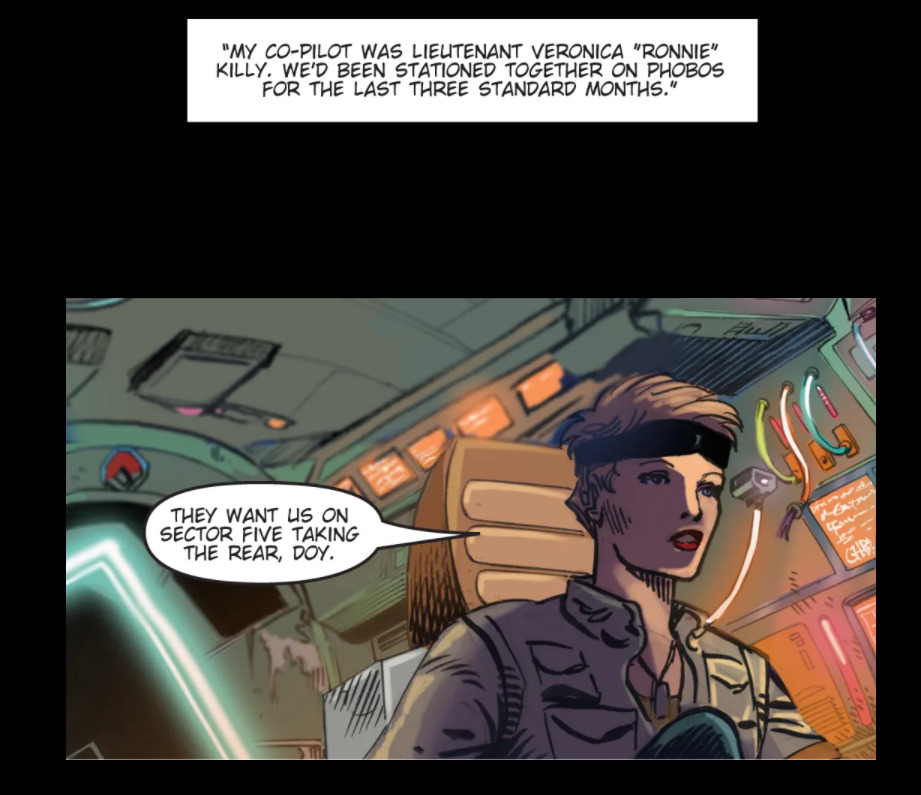 When the series was originally published by Apple Comics, it included commentary by Chuck Dixon detailing the genesis of the series.

Dixon explained, “In the dark days of the winter of 1988, Enrique Villagran and his brother Ricardo invited me to the studio they shared in suburban Philadelphia. As usual on these visits, we had a lively discussion about comics, movies, and guns until the wee hours of the morning.

He added: “That evening, between the jokes and the stories, Enrique showed me some drawings he had done. They were in her usual, attractive style and depicted male and female space warriors and a scantily clad cave girl.

“He asked me what I thought of them. I told her they looked great and asked what story they went with. He replied that they went with any story I chose so that they go with it,” he explained. 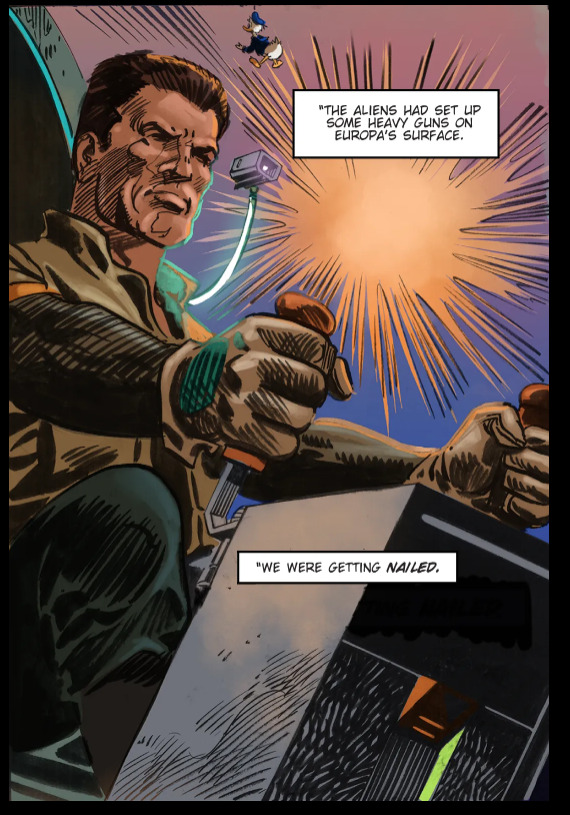 After explaining that Argentinian creators start their stories by drawing characters and then building stories around them, Dixon explained, “We talked about the drawings a bit and I took them home that night. After about a week I brought in Enrique for the problem you are holding now. I adapted it keeping Enrique’s strengths in mind.

“He can draw very macho kind of action heroes, as well as the appealing heroines required for this kind of sci-fi action story. Moreover, his mastery of all things military is astounding. Look at the Space Marines in this issue. These guys even have military body language“he added.

Dixon continued, “The other element I included in the script was a healthy dose of sarcastic humor. Argentinians and we Yankees are the world masters of sarcasm. The caustic remark and the withered gaze are fine art in both our cultures, so it seemed natural to season Doy and Ronnie’s dialogue with many of this one.

He concluded, “It was a pleasure to write and I hope all three issues will be as much fun to read. We would like to touch on a few more. Enrique has many more designs.

As noted above, this new series is making its debut as Arktoons hits the 4 million pageview mark. When the site launched, it featured 16 different series. In its first year alone, the site now has 60 different series airing new episodes on a weekly or bi-weekly basis.

Arkhaven editor Vox Day praised the many series on the site: “Every month we add a new series or two. Sometimes it’s something from the legendary Chuck Dixon vault like The Stranded or The Dixon Filems, sometimes something completely new like How To Succeed Like a Dark Lord or Something Big.

He added, “And now independent creators are bringing in established series like Chateau Grief and Shotgun Samurai from Webtoons; what’s encouraging is that these indie series aren’t just getting more views on Arktoons than on Webtoons, they’re getting LOTS more views. 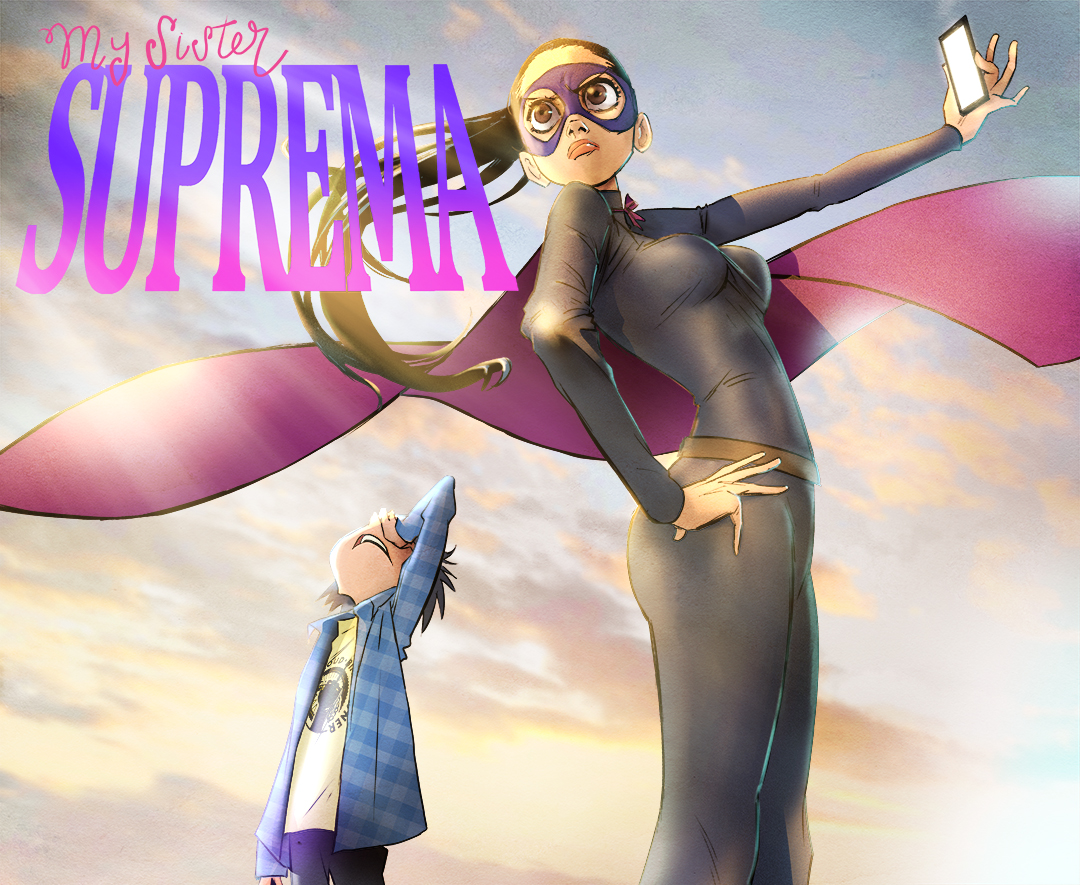 Dixon, who has many titles on the platform, also observed: “Anyone can see all the numbers on the site. And everyone can see that the time between each million views is getting shorter and shorter.

The most popular series on the platform are Hypergaminga romantic comedy about mice, Wild Memesa comic strip featuring “viciously biting commentary on current affairs”, Stonetossa similar comic in the vein of Savage Memes, and The Midnight War“a vampire comic with a plot violent enough to rival A Game of Thrones.”

It has also introduced a number of new series which are rapidly gaining popularity including How to Succeed as a Dark Lord and my supreme sister.

Needless to say, it doesn’t look like Arktoons is going anywhere, but it offers a clear alternative to Marvel, DC, and even WEBTOON. 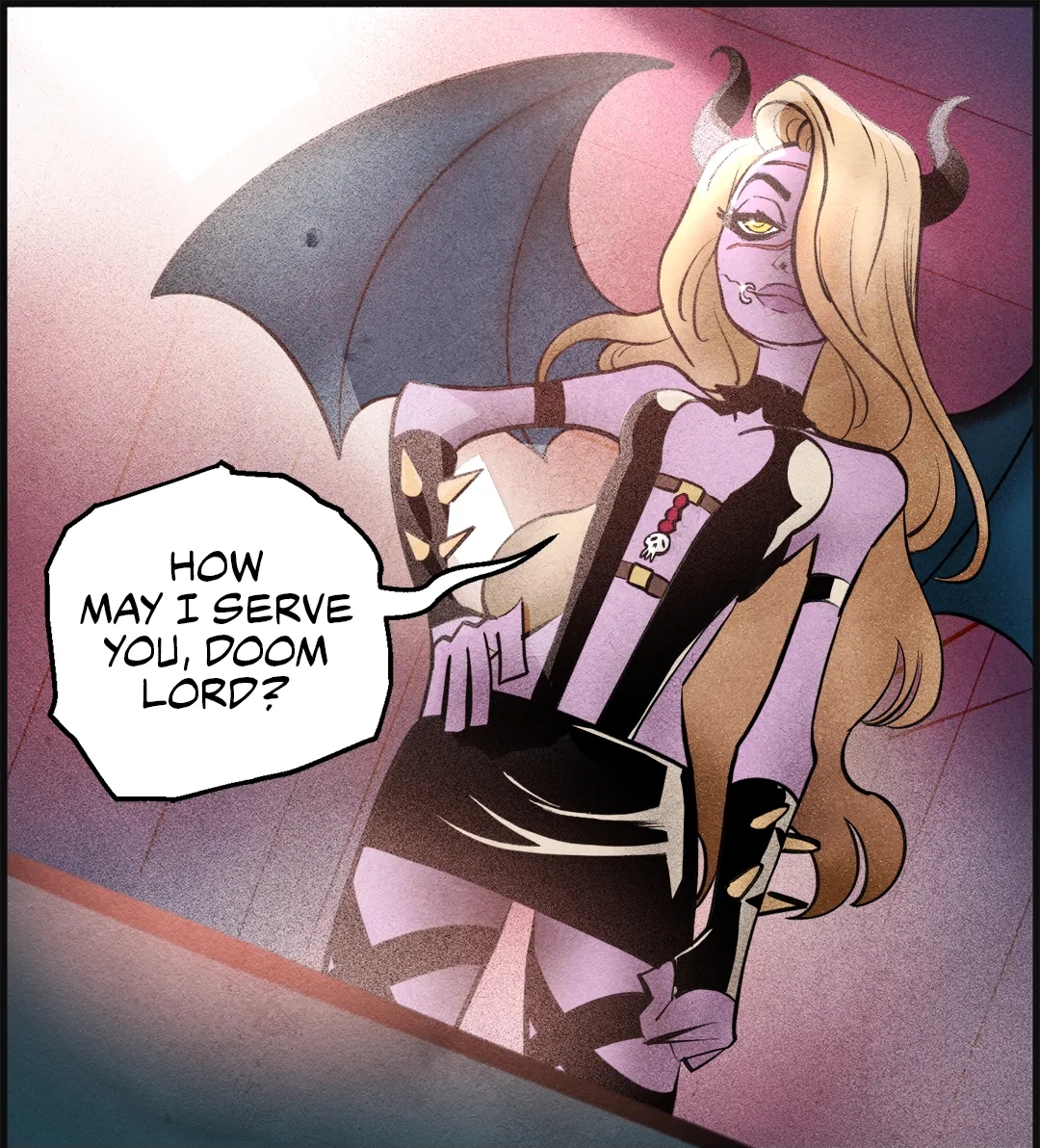 Source: How to Succeed as a Dark Lord

Do you plan to check out The Stranded on Arktoons? What do you think of Arktoons hitting the 4 million pageview mark?

NEXT: Chuck Dixon: ‘DC & Marvel Seem To Be In Some Kind Of Suicide Pact With Themselves To Destroy American Comic Books’

More comics are coming! More comics are coming! At a time when we could all use a few more laughs, the Lansing State Journal is expanding its online presence of comics, puzzles, and advice columns. Through an updated partnership with our syndication providers, we’re unveiling a new digital lineup – featuring favorite comics such as […]

| In July 2013, Image Comics made a major industry shift by declaring that it would sell its digital comics DRM-free, allowing people to download them to a variety of devices and read them without having to use an app. owner. A year later, ComiXology began allowing publishers to sell DRM-free comics through their digital […]

RIP Madefire, a startup that recruited top artists to reinvent comics for new formats and platforms. An announcement on Madefire’s website says the company entered into a “creditor benefits assignment” (explained as “state-level insolvency proceedings similar to bankruptcy”) earlier this month, which was then reported this morning in The Beat. As a result, no new […]